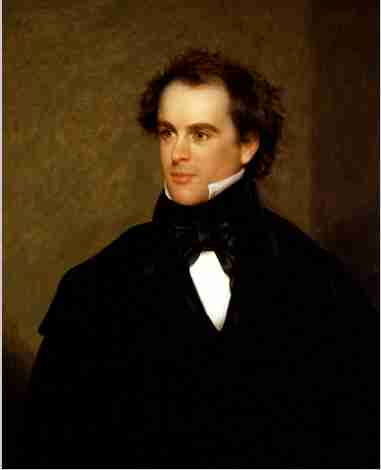 (all complete HTML texts here) as well as many other romances, tales, and sketches. This WWW site is dedicated to enhancing our understanding and appreciation of Hawthorne's writings and life.

NEW: what is new at Eldritch Press--keep in touch via one central page.

The bicentennial (200th) anniversary of Nathaniel Hawthorne's birth was held July 4, 2004, in Concord and Salem, Mass.

NEW: We have dedicated all our work here to the public domain under a deed available from Creative Commons. (Except for "The Wayside: Home of Authors," held by heirs of the author.) This supercedes all our previous copyright notices.

NEW: Notes in England and Italy , by Mrs. Hawthorne, 1869, 1871. These extensive notes go along with the works mentioned below.

NEW: Passages from the French and Italian Notebooks of Nathaniel Hawthorne, as edited by his widow, 1883 edition, are online.

NEW: Passages from the English Note-Books of Nathaniel Hawthorne, as edited by his widow, 1870. Caution: one big (1.2MB) file!

North Shore Community College, Danvers, Massachusetts, is planning a large public web site on Hawthorne in Salem, funded by the National Endowment for the Humanities. A call for papers and other assistance has been issued by Professor Terri Whitney. See the "Hawthorne in Salem" site.

NEW: The Wayside: Home of Authors, by Margaret M. Lothrop, is once again available, now we have secured permission from the copyright holder.

NEW: The Trustees of Reservations finally has a page on The Old Manse. Concord.org also has an attractive new site on the Manse.

Fun introduction! Did you know that we have discovered the original sound recordings that Hawthorne made during his life, with the most modern equipment and most powerful computer available to him ;-)? See our old page, An Audible Stillness.

Check out our new color illustrations to The Scarlet Letter. (A new window will open--keep it open while you read the text.) We ask only this--if you enjoy viewing these beautiful pictures, think about readers who are blind or have visual difficulties which make them impossible to see. You can make these pictures accessible to them by helping write text descriptions we can place online. Please email your work and we will give you credit. See the first few for examples.

If you like illustrated books as much as we do you will also enjoy "Howe's Masquerade" with many illustrations (be patient). It has been on this site for years but most readers miss it.

Please visit the excellent site on the only home Hawthorne owned, The Wayside, now property of the U.S. taxpayers.

We now have new pages for The Scarlet Letter. We have finished the glossary and many notes for all chapters, at last. We expect to revisit this book and supply a better bibliography, if we can get copyright permission to do so. If you earlier downloaded this text, please grab a new copy, since the edition here as of 1999-10-01 has fixed many many errors. Please let us know when you find typos!

The Scarlet Letter Essay Contest has been cancelled. We no longer maintain a discussion page. We can neither answer queries nor help with student assignments.

Expanded list including tales and book tables of contents, or just the tales and sketches in the order of first appearance in magazines, or the works in alphabetical order.

Read the best of the humanities on the web. This Nathaniel Hawthorne web site has been selected as one of the 20 best humanities web sites on the World Wide Web by EdSITEment. EdSITEment is a joint project of the National Endowment for the Humanities, the Council of the Great City Schools, MCI Communications Corp., and the National Trust for the Humanities. The project has engaged professional teachers to write a teacher's guide to this site. We are amateurs and have no other relation to these groups nor receive any financial support. Please follow the link for more information.

List of places from Hawthorne's life and writings (at this site)

The Discovery Channel on cable or satellite television, available at many schools, is featuring The Scarlet Letter among its Great Books programs.

Teachers should visit the Discovery Channel School web site for information that might be helpful for teaching this great novel.

Other genres and media

Other great sites and fun stuff

Suggested MLA citations to this web page, HTML code and text.
Use as in ?Help? page citation guide.

This work is dedicated to the Public Domain.